If  you have this kind of cockroach Act now!! catch the problem in early stage, other wise they will invade your house, we use very successful methods,  and don't forget our service is guaranteed call now 0416-399-278 Eggs are carried in an egg case, or ootheca, by the female until just before hatch occurs. The ootheca can be seen protruding from the posterior end (genital chamber) of the female. Nymphs will often hatch from the ootheca while the female is still carrying it figure2. A typical egg case contains 30 to 40 eggs. The egg case is a tiny, brown, purse-shaped capsule. It is about 8 mm long, 3 mm high, and 2 mm wide figure 3. 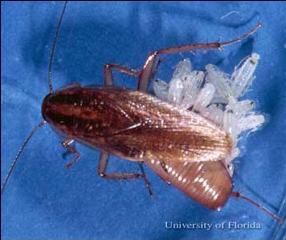 The nymphal stage begins with egg hatch and ends with the emergence of the adult. Nymphs are dark brown to black in color, with distinct dark parallel bands running the length of the pronotum. Nymphs do not possess wings. The number of molts required to reach the adult stage varies, but the most frequently reported number of molts is six. The stage between molts is called an instar Figure 3. At room temperature nymphs complete development in about 60 days. All developmental stages actively forage for food and water. 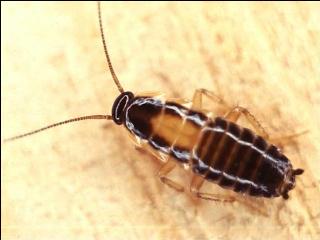 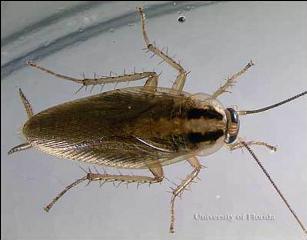 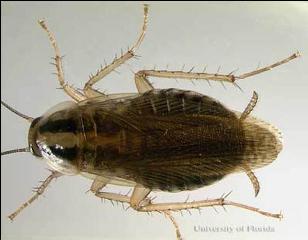 The German cockroach has three life stages typical of insects with incomplete metamorphosis: the egg, nymph, and adult. The entire life cycle is completed in about 100 days. However, factors such as temperature, nutritional status, and strain differences may influence the time required to complete a life cycle. German cockroaches breed continuously with many overlapping generations present at any one time. Under ideal conditions, population growth has been shown to be exponential. Actively growing field populations are comprised of 80 percent nymphs and 20 percent adults. The German cockroach is omnivorous, eating table scraps, pet food, and even book bindings.

German cockroaches adulterate food or food products with their feces and defensive secretions, physically transport and often harbor pathogenic organisms, may cause severe allergic responses, and in extremely heavy infestations have been reported to bite humans and feed on food residues on the faces of sleeping humans. In addition, some scientists suggest that German cockroach infestations may cause human psychological stress and that the stigma associated with infestations alters human behavior. For example, people with infested houses do less entertaining, and avoid the kitchen at night for fear of encountering a cockroach.

Since the German cockroach is considered an aesthetic pest, the action threshold for this insect depends upon the tolerance of the people living in the infested dwelling. However, most people associate cockroach infestations with poor sanitary conditions and typically go to excessive lengths to eradicate them from their houses.

See the following for insecticide recommendations:

Non toxic and low toxic alternatives for German cockroach control are available. Sticky traps can be used to monitor or reduce population size. Improving sanitation by eliminating food and water sources and clutter can have a significant impact on reducing the chances of infestation population size. Finally, exclusion practices such as sealing cracks and crevices will reduce harborage space and also negatively impact population size.

So let's do a theoretical calculation based on the facts above:-

Let us assume that the first female lays 1 oothecae, this will give us 40 eggs for arguments sake.
Say that there is plenty of food about and nymphal development is completed in 8 weeks and that 50% of these nymphs turn out to be females, let's say 20 females.
These females then lay 1 oothecae each.
This will give us 20 times 40 eggs which is 800.
Again there is plenty of food about and nymphal development is 8 weeks and again 50% are females.
These females lay 1 oothecae each.
This gives us 400 times 40 which is 16000
So after 9 months we have got sixteen thousand cockroaches, this assumes that none would die in development (mortality rate) but it does not take into account the fact that the original cockroaches would still be laying further oothecae and that these would be hatching and maturing.
There is of course a high mortality rate probably about 90%, and a good job too, but even so, if an infestation is not controlled it can very soon get out of hand